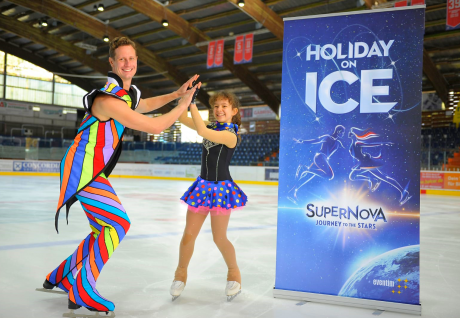 Figure Skating in Germany. «Holiday on ice» - most popular Ice show in Europe, is currently conducting the winter tour in Germany. The tour includes 30 German cities. In order to promote German figure skating, the organizers of the tour gave German skaters the opportunity to take part in their popular Ice show. Every athlete had the opportunity to apply for participation in the ice show. Of course, the organizers had strict criteria for the selection of figure skaters and from each of the cities, only one candidate was nominated for the show.

Marie Jesske's parents sent to organizers a video of her daughter skating, which resulted in Marie being selected for the «Holiday on ice» in the city of Hannover. Marie was chosen by Alena Savchenko, Gold Medalist of the XXIII Winter Olympic Games. Now Marie has to perform in the show with figure-skating professionals, get a lot of ​​new emotions and invaluable experience.

In the summer of 2019, Marie Jesske took part in our European figure skating camp «Ryabinin Camps» in Latvia, where children are trained by experienced coaches from Russia. Our coaches appreciate her hard work, athletic ambition, and perseverance, which is an integral quality of character for an athlete who sets high goals. The leadership and coaching of the «Ryabinin Camps» wish Marie continue to win victories. We invite every figure skater to attend our international figure skating camps.