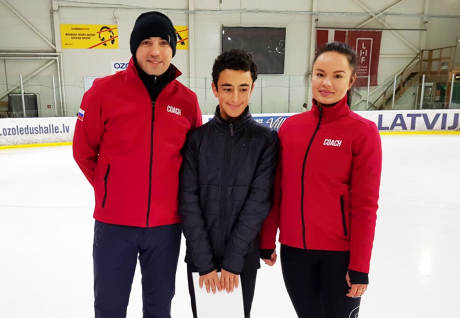 Skater Philip Kaimakevich, born in 2003 in Bulgaria. In January 2017, when Philip was 13 years old, he tried to skate for the first time and in a very short time figure skating became his passion. Philip got a motivation for training from the figure skaters from one of the local Bulgarian clubs. They skated at the same rink with Philip. Skaters with their skating skills inspired him to start practicing figure skating.

Philip learned to skate on his own, during the hours of public skating. After he learned the first steps and began to skate more confidently, he had an idea of ​​learning to jump Axel. He turned to his Mom for help and she began to help him learn the jumps. In a few months he jumped Axel, by the end of 2017 he had mastered 2T, 2S, 2Lo and by August 2018 had completed all the double-jumps.

Summer figure skating camp in Latvia brought Philip great benefit in the study of multi-turn jumps. In the summer of 2018, he attended the training camp of Alexander Ryabinin - Ryabinin Camps, to study Axel in 2.5 turns and triple jumps. At the training camp, Philip spent 2 weeks and at the end of the camp, he began to jump Double Axel, triple Salkhov and triple Loop (2A, 3S, 3Lo). After our camp, Philip continued his training with his Bulgarian trainer, after a while also learned triple Flip and Lutz (3F, 3Lz). In the fall of 2019, Philip goes to the Autumn Figure Skating Camp in Calgary, Canada 2019 to start exploring triple Axel  (3A). Philip is already taking part in the competitions, right now he is preparing for the starts in Romania.

Motivation in figure skating is a very important thing, as in any sport. Philip proves that everything can be learned if you have the desire and motivation to train. Philip needed a 3 year period to become from a novice skater to a skater with multi-turn jumps. Thanks to the perseverance and precise purpose, it is possible to achieve high results in sports. We wish Philip new victories and with great interest will follow his future athletic career.

While attending the Ryabinin Camps, Philip received the necessary training skills and knowledge to learn jumps much more convenient, faster and easier. Dear skaters and parents! We invite you to our figure skating camps, here you will get new knowledge and believe in yourself! Information about all our Figure Skating Camps can be found HERE!